For an updated cv please email
Posted by the-designwall at 05:23 No comments:

Just completed a successful (almost) 4 month freelance graphic artworker contract at Sodexo in Swindon. And am now looking for new opportunities either freelancing or in a permanent position.

My experience and knowledge is vast and varied. I have worked agency and client side. I began my career in print and press production, where i was also involved in traffic and print buying. Here I also took a print process course.

Discovering computers at the dawn of the mac age I suddenly realised this is where my future lay. I enrolled on a desk top publishing course which saw me gain City and Guilds levels 1 and 2.

I managed to get a role that included both my mac and previous production skills, although i quickly dropped the production side and have since concentrated on the mac.

I have held roles since such as artworker, creative artworker, digital artworker, graphic designer and studio manager.

Over the years I have taken various software course such as Adobe Illustrator, Indesign, Flash and Dreamweaver. And am currently taking a web designer course with the learning people.
Other software used is Abobe Photoshop and Quark Xpress.

I have worked on brand sensitive and blue chip clients such as Mercedes-Benz and smart where I created not only press and print material but also alot of digital work such as emails and flash banners. Other clients include Vodaphone, Nationwide, Sky, London Underground, AA driving school and Sodexo.

I had a career break in 2012 to recover from an operation and since then have been freelancing. Either on my own clients, which has included web design, build and maintenance, and graphic design to going into companies.

At my most recent, Sodexo, I worked in their bid team putting together large documents and various design requests. Here I worked on the latest release of the Adobe Creative suite - InDesign, Illustrator and Photoshop, as well as working on Microsoft powerpoint, excel and word.

Posted by the-designwall at 03:43 No comments:

Currently looking for job opportunities, either freelance/contract or full-time roles. I would class myself as a creative artworker and have good knowledge of the CS Suite having used Dreamweaver, Photoshop, Illustrator, Indesign and Flash. I have also used Quark Xpress. My previous permanent employment has been agency based.
I can provide a cv and in the first instance a pdf of previous work. Please email for details.
Posted by the-designwall at 04:22 No comments: 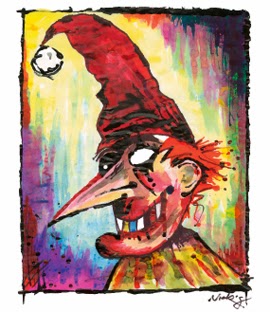 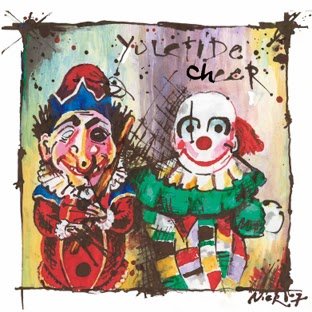 Another Xmas card from the alternative Xmas card collection, the front was originally drawn and coloured in 2007 while the Jester on the back is from 2008. Both were then scanned and 'cleaned-up' in photoshop.
Posted by the-designwall at 06:08 No comments:

Zombie Xmas is the latest addition to the Alternative Greeting Card Collection just launched on the designwall website - http://www.thedesignwall.co.uk/greeting-cards.html. As with all the cards, the initial drawing was made by hand and then coloured using fountain pen ink. The artwork was then scanned and retouched using a apple mac and cleaned up via Photoshop before placing into the Christmas Card format, using in Quark Xpress.
Having looked at previous Xmas Cards there was a definite gap for a zombie style creation, two designs were completed with one going on the front while design two took its place on the back. 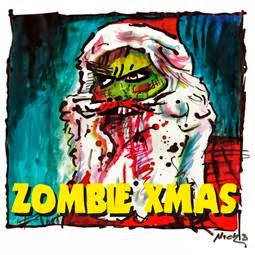 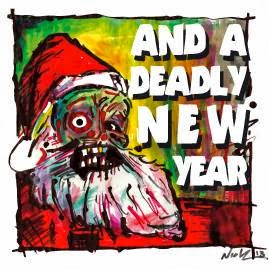 Posted by the-designwall at 08:30 No comments:

All new look website now coming to life with more content. The Xmas greeting cards shop is now open for business!!
Posted by the-designwall at 06:26 No comments: